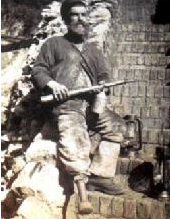 Ochre miner at the Wick Quarries - PHOTO: THIS IS BATH

29 days after my pledge to write 500 words a day: I am not quite on track – that would mean I had already written 14,500 words which would of course be wonderful. But I have, perhaps 5,000 words more than I would have had I not thought, every day, that I had to do it, like it or not. And some of the images and incidents are keepers, especially the ones I wasn’t expecting.

Today is a “writing day” which meant that I was out in my garden in the sunshine at lunchtime reading a book for research, and taking notes, when neighbours passed. They had lunch guests, would I like to join for a gin and tonic? It took me two minutes to close the door of my house, and be round there.

Our neighbour has always promised to take me to the ochre mines at Wick, in Southern Gloucester. He is very amused that I went round the world to Australia to find ochre when there was perfectly good material five miles away from the place that would later be my home. He said that in the old days you used to see the workers finishing their shifts at five o’clock and they would look yellow-white as ghosts, their features and clothes clouded in dust. He also said that the red tarmac on the Mall in London was coloured with pigment of Wick. There is, apparently, a letter from King George V, thanking the men of Wick for the redness of his road.

It is apparently now a nature reserve. And there’s some good local research on its history. I must visit soon. I can’t believe I haven’t been there before. But first I have 500 words to write.