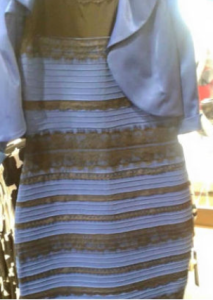 The furore around whether this dress, aka #TheDress is blue and black or white and gold (I say it’s white and gold. Obviously!) and the delicious vox pop videos the BBC and others are making of when they ask people about it (“you’re winding me up!??? Are you turning my spanner???”) makes me wonder what would have happened if there had been twitter and video in 1820s Paris.

That year the Gobelins Royal tapestry workshop in Paris had a problem. They were using the same bright dyes that they’d been using since the 1660s, and which they were famous for, and for which they were charging a fortune. The trouble was the coloured threads started coming up grey on the tapestry.

A dress manufacturer could just change the production line but these guys only managed about a square metre in a year (tapestries were about 12 feet high and longer across and were made by teams of weavers) so mistakes were pretty painful.

Today they’d have had young media types wandering around posh Parisian arrondissements holding up tapestry samples of bright red against orange and the same bright red against purple (“tu me fais marcher!?? vous me tournez ma clé à molette!!!?”) with the first one so much duller than the second. END_OF_DOCUMENT_TOKEN_TO_BE_REPLACED