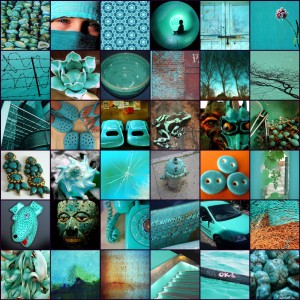 In Arizona in 2003, looking for peridot, I visited a turquoise seller whom the locals called the “Turquoise Lady”. She said I reminded her of her daughter, Vicky, and told astonishing stories about wild west shows in the 1930s. She said that the Navajo like getting rough turquoise stones and carrying them on horseback, so that the movement of the horse and their riding against their leather chaps polishes the stone in ways that encapsulate the journey.

Not Writing About Turquoise

This meeting, and my knowledge from my travelling as a teenager of the Tibetans’ love of the stone, intrigued me and made me want to include turquoise as a chapter of my book Buried Treasure/Jewels. But I stopped writing about turquoise for two reasons. First because my editor said (in a very firm voice indeed) “enough already” and second because a friend lent me Ellen Meloy’s Pulitzer Prize finalist book The Anthropology of Turquoise (2002) which said such beautiful things about turquoise (and the desert) that I found myself just wanting to copy out her lovely sentences rather than look for something more of my own. 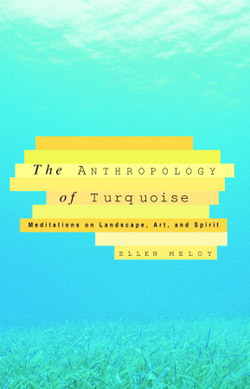 Just now I googled Ellen because I thought it was high time I wrote to her to say how much I enjoyed her writing as, in her terms, a “lone eagle free-lance writer” and was sorrowed to read that she died in 2004, suddenly.

Here are a few of the things she wrote about turquoise, which I noted down in my notes file so long ago, and which I’ve just looked at again:

It is the stone of the desert. It is the color of yearning. . . . Poke a shish kabob skewer through a globe at the Colorado Plateau and it will come out the other side on the Tibetan Plateau. More than all others, the cultures of Tibet and the native American Southwest have absorbed turquoise into their traditions, ceremonies, and folklore.

P.109 “Southwestern tribes like the Navajo and Zuni wed turquoise to silver, to the trading post and reservation system, and to an Anglo economy that calved off some of their work from tradition into the realm of the tourist market where, to paraphrase one ethnologist, design became the Indian’s idea of the trader’s idea of what the Anglo thought was an Indian’s idea of design.”

P.116 “What has been said about gold can be said about turquoise: turquoise is the burden of waters.” P116:

During the civil war in 17th century England, a Cambridge scientist Thomas Nicols wrote a Lapidarie, relating the properties (both physical and magical) of all the stones he could learn about. “Of the Turkey-stone they say, That it doth participate with all its masters dangers, perils and evils, and that it doth receive his injuries, and the harm of his blows, falls and contusions onto it self. But those that think that any gems or pretious stones are sensible of injuries, or affected with strange alterations, by a naturall discored which is betwizt them and unclean persons think much amisse: for all gems are materiall, mixt, naturall things, and therefore by their own proper qualities they can effect nothing else but naturall things. (p30)

In Shakespeare’s Merchant of Venice, Shylock, on learning that his daughter has taken his turquoise ring, given him by his betrothed long ago, and swapped it for a monkey, says: “I would not have given it for a wilderness of monkeys’.

Pacific Sky on the Head

And finally, courtesy of a friend, an almost turquoise message from a correspondence chess opponent in Russia:

“From the clean heart I congratulate You with holidays of New! want You lucky cristmas, good health, creative successes, and pacific sky on the head!”